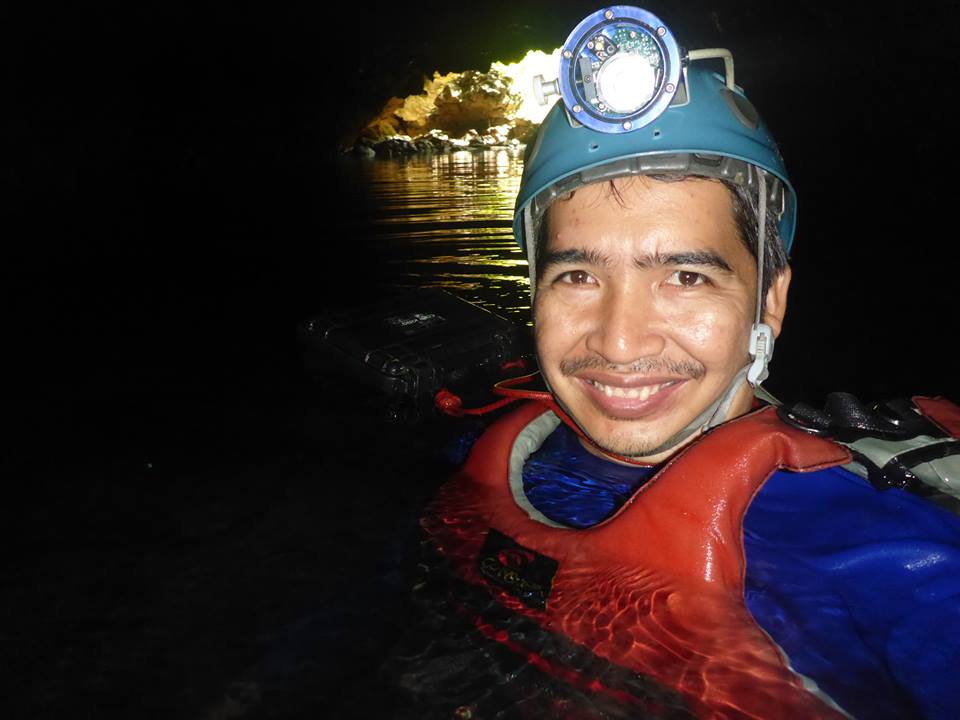 Hi, I am Joni Abesamis Bonifacio, a 40-year-old nature lover and adventure seeker who has traveled around the country in pursuit of adventure. My passion includes cross-country biking, climbing mountains, canyoneering, cave exploration, among other outdoor activities.

What started as a hobby has now become a business venture. I am the proprietor/owner of TREXPLORE the ADVENTURES, which is based in Catbalogan City, the capital of Samar province in central eastern Philippines. TREXPLORE the ADVENTURES is a local tour operator that provides cave guiding as well as tour guiding services to local and foreign visitors who want to explore the different tourist destinations in Samar and nearby Biliran province.

TREXPLORE is a combination of the words “Trek” and “Explore.” Samar Island, which is composed of the provinces of Samar, Northern Samar and Eastern Samar, and the island-province of Biliran, boasts of natural wonders such as beautiful beaches, scenic waterfalls, unique rock formations, and wonderful caves.

TREXPLORE has a team of experienced caving and canyoning guides. I have good connections with local porters as well as accommodation and transportation providers. I usually lead TREXPLORE’s caving expeditions. As a cave master, it is my duty to ensure the safety and welfare of our clients.

I am an experienced caver, having explored several caves not only in Samar Island but also in other parts of the Philippines over the past 21 years. I am proud to say that my mentors are veteran cavers from France and Italy. I also had opportunities to join some international caving expeditions in Samar Island like the one led by Italian Guido Rossi and another led by Frenchman Marcel Paul.

I acted as a guide to some cave divers who went to explore the water-filled caverns in Guiuan and Taft towns in Eastern Samar.

There are around a thousand caves in Samar Island, but only a hundred has been explored. A majority of  Samar’s caves are still waiting to be discovered.

Presently,  I am promoting  the Langun-Gobingob Caves in Calbiga town, the biggest cave system in the Philippines and the second biggest in Southeast Asia; the Lobo Cave in Jiabong town, which features an underground waterfall and river; and the Crystal Cave in Catbalogan City, which I and my colleague, Eleazar Labtic of Huplag Speologists, discovered in 2014. Crystal Cave boasts of crystal-like cave formations such as sparkling stalactites, stalagmites, columns, and helictites.

I have been organizing caving events for Filipino cavers every year, which I categorize into caving for neophytes and extreme caving.

Aside from caving, I am also a biking enthusiast. I went into solo biking, covering routes in Mindanao, the Visayas and Luzon, during breaks in my college days at the Cebu Doctor’s University. I also organized a biking club in Catbalogan City after I finished my BS Biology degree in college. A few years ago, I joined a group of bikers who went into a bike marathon around Samar Island, passing by some tourist spots in the provinces of Samar, Eastern Samar, and Northern Samar.

It was through this Lonely Planet travel guide, a couple of travel blogs, and my own website  that I got noticed by foreign caving enthusiasts. They started to contact me, and most of them eventually visited Samar.

Although TREXPLORE ADVENTURE was set up in 2000, it was not until a decade after when foreign visitors began coming to Samar. It started with a just a few tourists, then the number rose to about 50 a year some five years ago. Now it’s about 100 per year of foreign tourists coming to explore the wonderful caves of Samar.

My fascination with Nature and the outdoors began when I was a member of the Scouting movement. My happiest days as a young kid then was when I would go hiking and camping. In college, I was already joining outdoor events like mountain climbing and biking. After the first international caving expedition in Calbiga, Samar in 1987, I got drawn into caving.

At that time, locals were afraid to enter caves because of their unfounded fear that caves are inhabited by ferocious animals or supernatural beings. Despite this fear, and even without proper training, some of my friends and I ventured into the dark recesses of the Calbiga caves where the foreigners had earlier held a caving exploration. After that, I got hooked to caving.

My big break came in 2002 when I was included in the caving expedition team of some French nationals led by Jean-Paul Sounier. I volunteered to join the team and was accepted. I acted as a guide and the group’s interpreter. Since then, I became a part of international caving expeditions in Samar, which is held every two years. Although I received no pay, the foreign spelunkers gave me some of their caving gears like helmet and harnesses before they departed for home. The cavers came from different countries like Italy, France, Australia, Austria, Belgium, Slovenia, Germany, and Russia.

Unlike my sister and brothers who found employment in line with their college courses, I opted to continue my outdoor activities. I find it fulfilling to set up a business that boosts and complements my passion for adventure and that is being a tour operator. My wife of five years, Rhine Sabordo Bonifacio, approves of my decision, and together we will work hard for the future of our now nine-years-old son Trex.