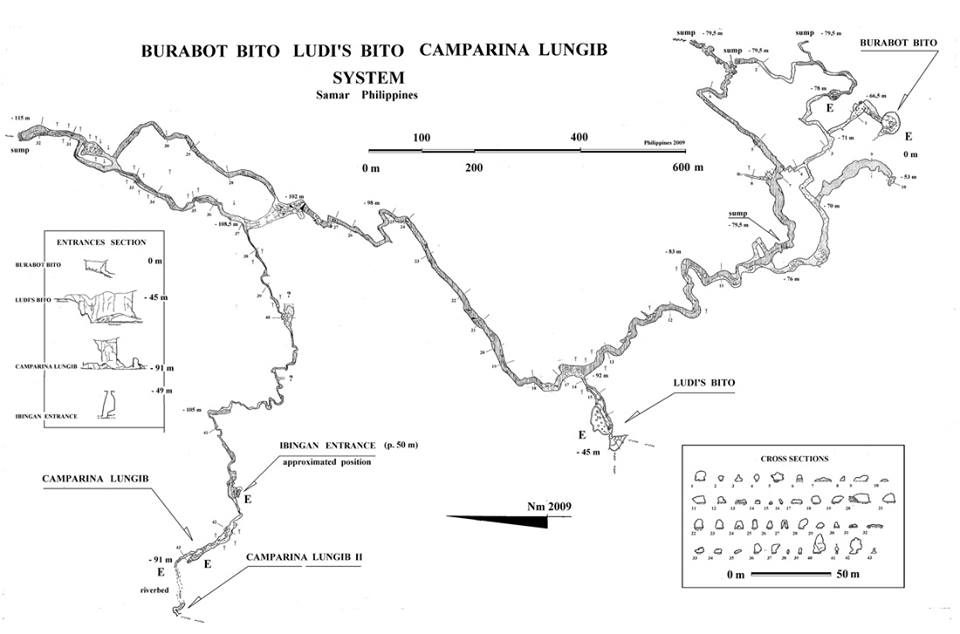 The Burabot System is hydrologically related to Langun Cave and Palaspas, which was proven by an Italian cave diving expedition in 2015, making the Calbiga Caves System the longest in Samar and the second longest in the Philippines. Near the Burabot entrance (E1), the cave has a labyrinthic section. Downstream it becomes a long and straightforward gallery, reaching the Ludi’s Bito entrance (E3) about halfway along, and then connecting with Camparina Lungib near the terminal sump. While Camparina is a subhorizontal cave, Burabot and Ludi’s Bito entrances are vertical.

Burabot Bito doesn’t need a rope to descend if following a small riverbed in the correct place (though one may be useful). After E1 ignore branches on the right to avoid getting lost. The first right-hand branch leads to smaller galleries with ducks and an unclimbed shaft entrance (E2). The second hidden right passage reaches an active branch where deep water flows from the Palaspas Cave sump, and a life vest should be used. Where the main gallery enlarges, the superb white walls of Paradise Gallery on the left render it one of the finest dry phreatic tubes in Samar. Navigation is easy up to the river, where the water-filled passage on the right becomes a sump which connects to the aforementioned active branch.

It’s an easy journey along the river to Ludi’s Bito, though a life vest should be worn. It takes about 2-4 hours from Burabot Bito to reach Ludi’s Bito. Entering via Ludi’s Bito (E3) requires a 40m rope and skills in SRT. The riverbed should be avoided, instead cross the bito at the top on the left side where a small slippery trail allows rappelling away from water. From Ludi’s Bito to reach Camparina Lungib entrance (E6) it takes another 3-4 hours. The river flows in a large gallery where it is seldom necessary to swim. Camparina is a keyhole-shaped inlet almost 1km long. Coming from this entrance (E6) the cave is followed along its floor until an impassable fissure, which requires a five metre climb, traversing a muddy gallery and rappelling to the floor.

All entrances of this cave are prone to dangerous flash floods and the river has a strong current; a tree trunk deep inside the cave suggests powerful flooding of the river. Exercise extreme caution in the entrances and river sections.